I decided after years of struggling to remember statistical concepts that I have to try to explain them so that:

Please note that this is not a very math heavy collection of posts, my goal is to get a better intuitive understanding of the concepts.
With all that being said, this is the first post in my statistics series and it is about the Law of Large Numbers!

Let’s try to map the words in the definition to mathematical constructions.

Here we assume that we are doing multiple trials coming from the same underlying probability distribution.

These variables are identically distributed (so all follow the same distribution) and they are independent (knowledge about the outcome of one of them does not provide any information about the others). More trials means higher n (larger sample size).

Average of the results

The expected value of a random variable can be thought of intuitively as the arithmetic mean of a large number of independent realizations of X. (This is not the topic of this post so I will not go into more detail)
The expectation of our random variables is the following:

Unfortunately, in many scenarios we do not know what value μ takes therefore we need something to estimate it.
This is where the Law of Large Numbers comes in and tells us that the sample mean should be close to the expected value and this “closeness” increases with the number of trials.
Stated in a mathematical formulation:

We are going to see three examples of the Law of Large Numbers for the following three distributions:

1. Samples from a standard normal distribution

In our first example, we assume the following:

Just as a reminder, this is what the standard normal looks like: 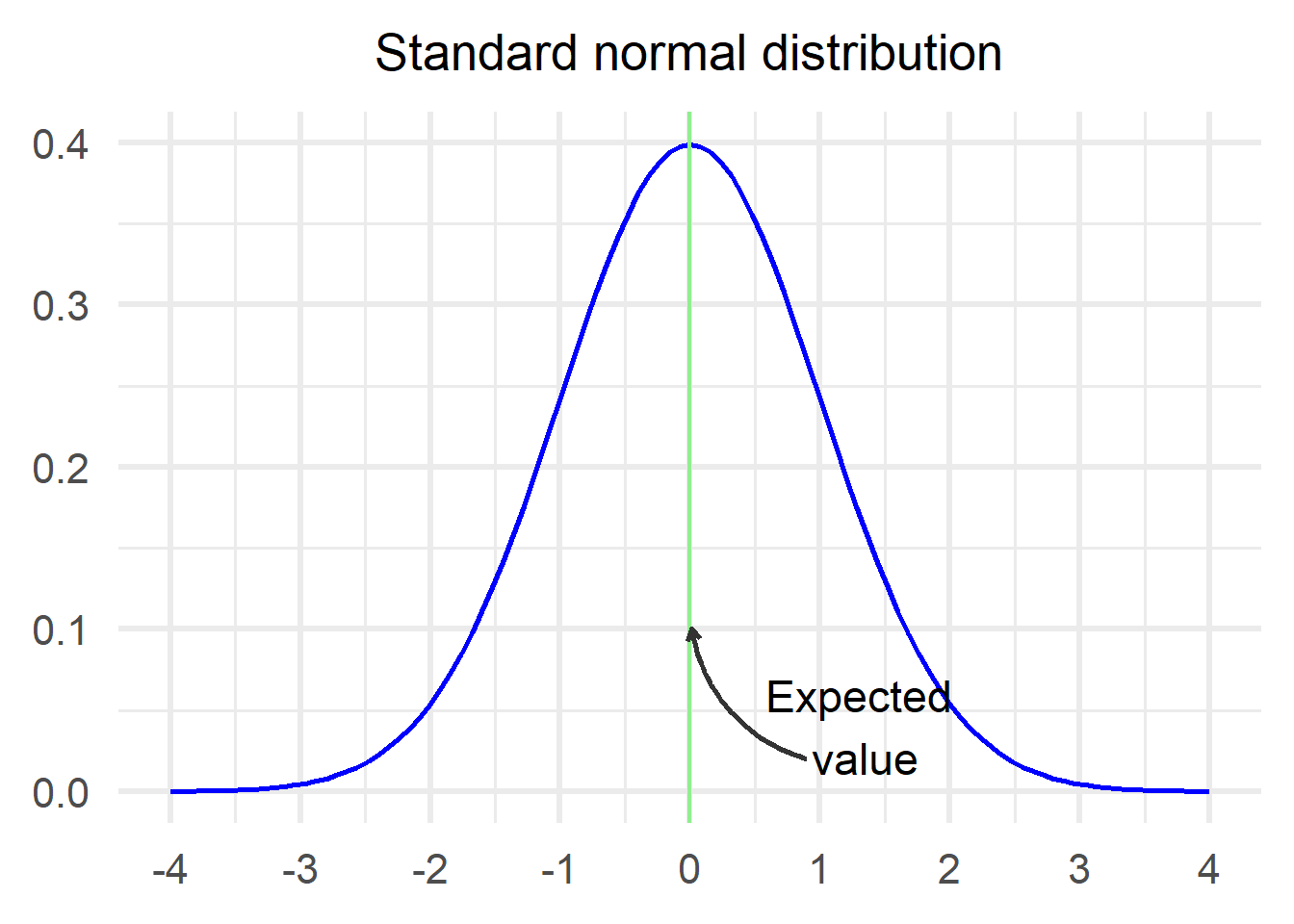 In the annimated chart above we can see how the sample average changes as sample size increases. At the beginning it is far from the expected value (marked in green) but as the number of samples grows larger it gets closer and closer. 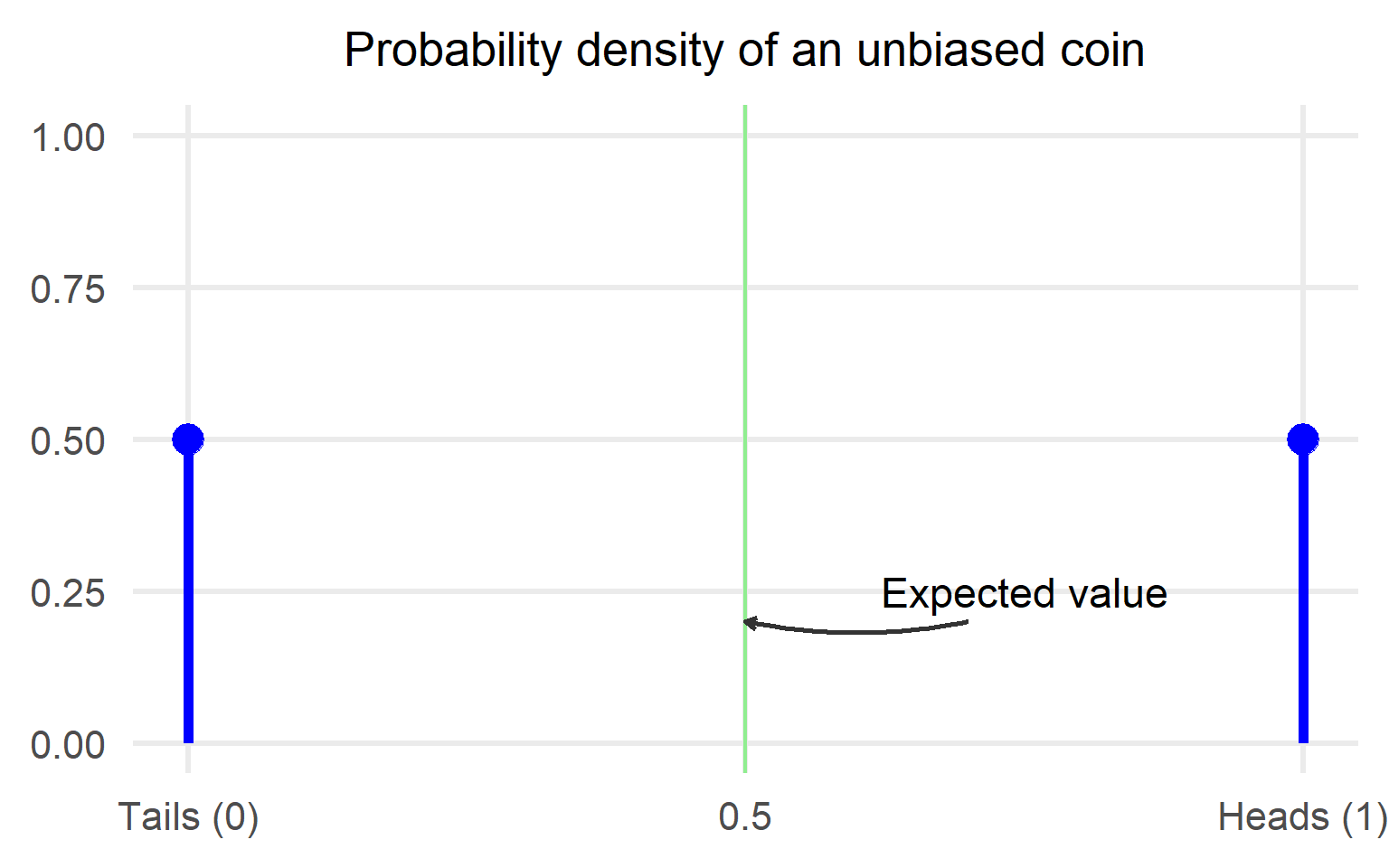 The expected value of an unbiased coin toss is 0.5 or equivalently phrased you expect to get half heads and half tails. Mathematically, we assume the following:

Let’s see how the sample mean changes as the number of samples increases.

Again we see that as the number of samples increases, the sample mean approaches the expected value.

3. Random distribution I came up with 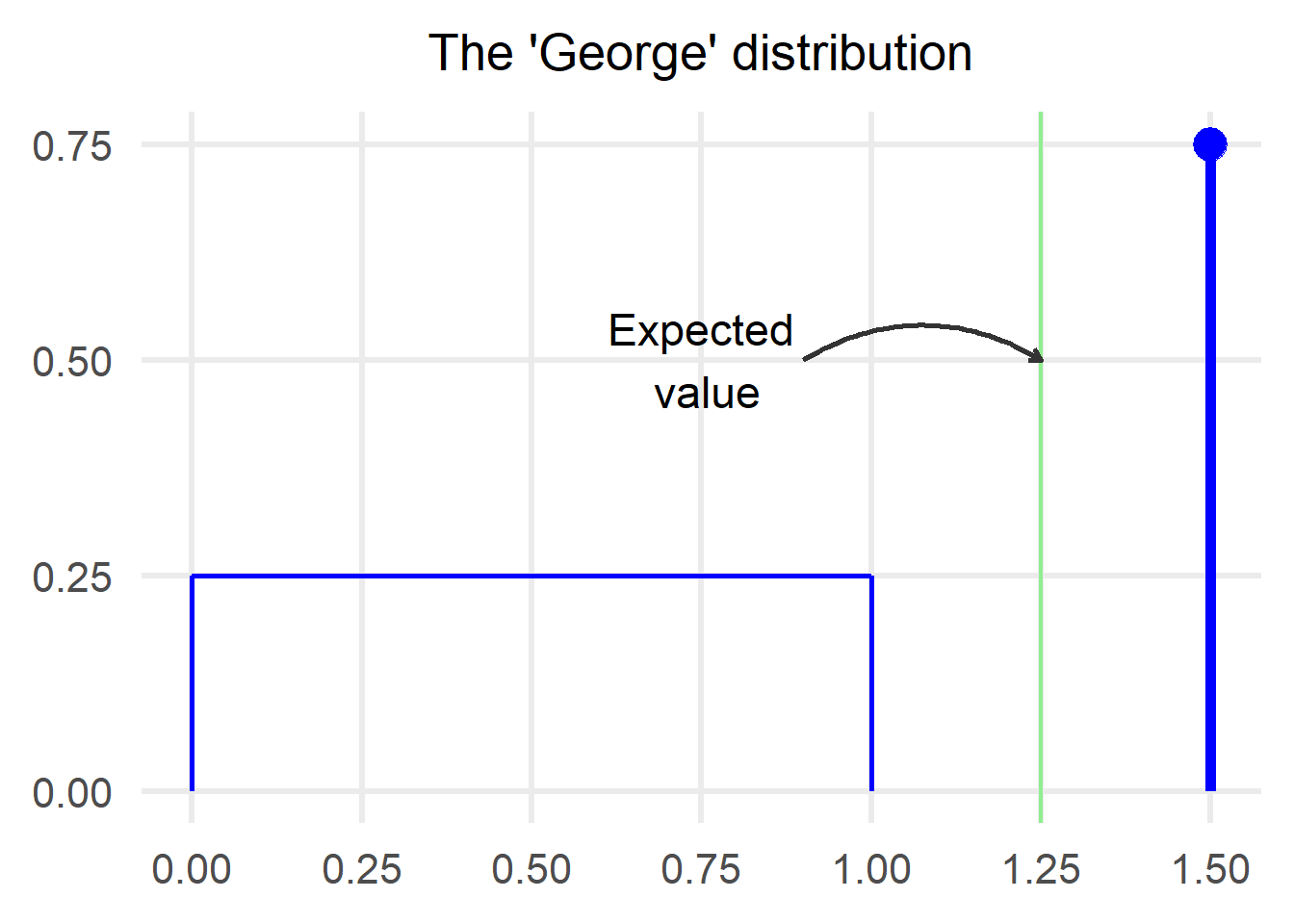 As we can see from the plot above, the ‘George’ distribution consists of the following two parts:

It’s a good idea to check if the total probability sums to 1:

We take again 500 samples from this distribution. Let’s see how the sample mean changes as the sample size increases.

Ok clearly something went terribly wrong! Here I have been plotting throughout this blog showing you that the red line eventually gets really really close to the green one but clearly it is not the case!
Did I miscalculate the expectation of my own distribution or is the Law of Large Numbers a hoax?

The Law of Large Numbers does not state anything about the speed of convergence. It only states that as the number of trials gets larger, the sample mean will get closer and closer to the expected value.
Let’s try it again but with a higher number of samples this time:

We can clearly see that it took longer for the sample mean to reach the expected value in my distribution but it did reach it nonetheless!

Why is this cool?

The Law of Large Numbers is a fundamental building block of statistics, as it allows us to substitute the expectation with an average. There are many scenarios where we know nothing about the expectation of a distribution we are interested in but we can use the law to estimate it.